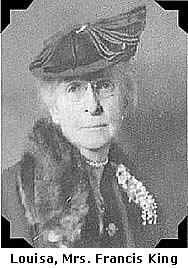 In 1910, Miss Jane Bowne Haines, a Bryn Mawr College graduate, purchased a 71-acre tract of rolling farmland in Ambler with the financial support of friends, and in 1911, founded the Pennsylvania School of Horticulture for Women on the site. These friends included other Bryn Mawr College alumn and members of The Garden Club of Philadelphia lead by the indomitable Mrs. Patterson, whose leadership also helped in founding The Garden Club of America.

The school was the first of its kind in the Commonwealth of Pennsylvania, and in the United States.  Miss Haines had visited several colleges of gardening in England and Germany during travel in Europe. She recognized that horticulture should also occupy a place in American education and wanted to provide a way for women to acquire the skills needed to earn a living in agriculture and horticulture.

In a speech to early supporters, Miss Haines said, “Believing thoroughly in the principle of horticultural training for women, and that the time for founding such an institution is now come, a number of people have associated themselves together with the purpose of opening, in the near future, a school for the practical training of women in gardening and kindred subjects. The purpose of the school is to offer educated and earnest minded women who have a love for the country life and an aptitude for country pursuits, practical training in horticulture.

Read more of the story here and get a copy of A Century of Cultivation 1911 to 2011 — 100 Years from the Pennsylvania School of Horticulture for Women to Temple University Ambler, written by Jenny Rose Carey, Director of the Ambler Arboretum of Temple University, and Mary Anne Blair Fry, a graduate of the Class of 1958.

The Woman’s National Farm and Garden Association, Inc. (WNF&GA) benefited from this same enterprising spirit. It was inspired by the British Women’s Farm and Garden Union established in 1899.  Our American version organized in 1914 by Mrs. Francis (Louisa) King with Miss Haines and Hilda Loines, another Bryn Mawr alum.  Together with some of her friends, Louisa King developed the idea for a farm and garden association whose aim would be to stimulate interest in the conservation of our natural resources and an appreciation for country life as well as to support the Ambler school.

Both the US and British organizations were more a professional society than a garden club with the shared objective to make it possible for women to obtain training, find employment and make a profession of horticulture and agriculture.

Mrs. Francis King (1863 – 1948) was a well known author of gardening books and many magazine articles.  She was also the garden editor of McCall’s Magazine and considered one of America’s leading authorities on flowers.  Using her personal garden in Alma, Michigan as a laboratory, she became a master of color harmonies.  She wrote numerous books and articles that influenced garden style especially during the period from 1915 to 1930.

Her writing appeared in House and Garden, Country Life and The Garden magazine and she had a regular column in House Beautiful (1922-1925).  Her first book, The Well-Considered Garden, was published in 1915 and describes how to create successful color harmonies and plant combinations in the flower garden.

She was a contemporary of Gertrude Jekyll, one of England’s most famous gardeners.  They were kindred spirits and friends. Gertrude Jekyll wrote the forward for The Well-Considered Garden.

Louisa King was named the first president and served in that capacity until 1920. During her presidency the broad purposes of the organization found expression in education and scholarship; the setting of high marketing standards and in conservation. It also saw the establishment of Woman’s Land Army Units (The Farmerettes) of World War I fame (pictured below). Learn more of how women made a difference in the gardens and farms of the world in the exceptional book Fruits of Victory; The Woman’s Land Army of America in the Great War by Elaine F. Weiss.

The history of WNF&GA is in a book written by Martha A. Nolan titled A Chronicle – The History of Woman’s National Farm and Garden Association, Inc. 1914-1984 published by Lesher Printers, Inc. Fremont, Ohio. The book is out of print though a copy may be found at the Schlesinger Library Radcliffe College, Cambridge, MA where the organization’s historical documents are stored. Other copies are sometimes available through online book sites.

​In celebration of the 100th Anniversary of WNF&GA in 2014, a commemorative publication was produced to bring history forward. All attendees of the 100th Annual Meeting held in Philadelphia were given a copy of the publication entitled One Hundred Years of Growing and Giving: Woman’s National Farm and Garden Association 1914 -2014 (text by Maureen S. Thompson, edited by Mary Pat Ford, and research by consultant Jenny Rose Carey).

We honor our founders for their tremendous work and foresight in recognizing the need to bring opportunities to women.

The aims and purposes of this nonprofit Association shall be, as stated in the Articles of Incorporation, “to enable our members to cooperate in furthering agricultural and horticultural interest through membership in divisions and branches throughout the United States in order: